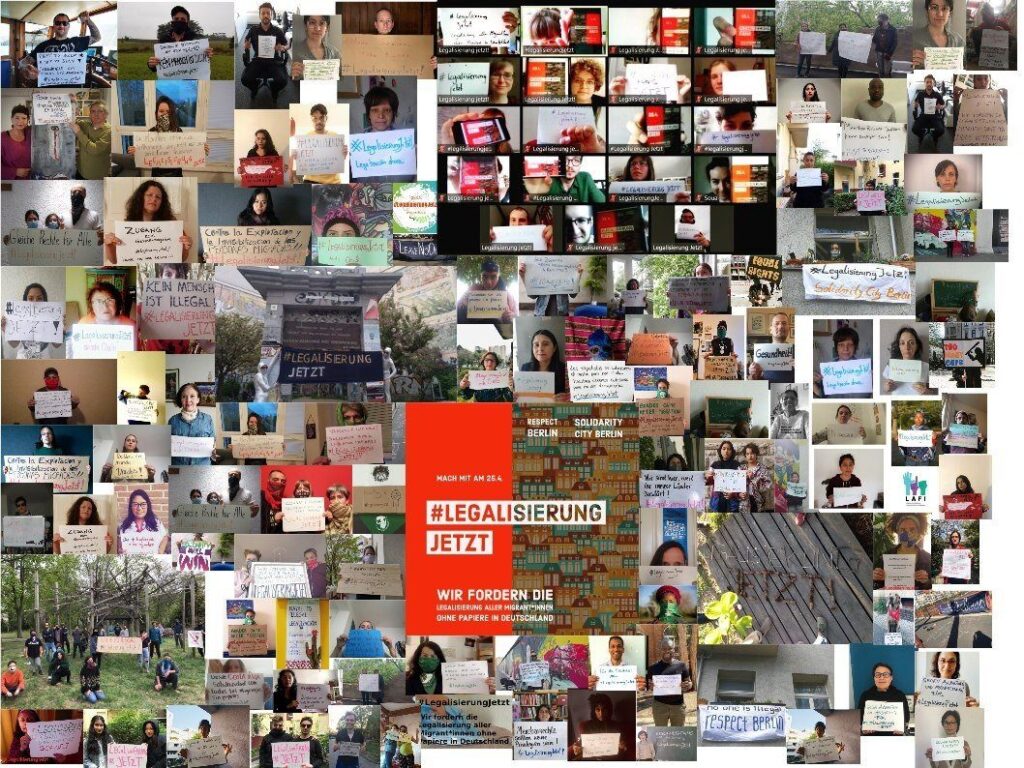 Commentary on the workshop “Learning and Struggling in Pandemic Times”

Time and space seemed to have become somewhat warped since the beginning of the pandemic. Personally, I often get struck by a feeling of paralysis when I think about our collective struggles and organizing efforts during the pandemic, almost like being frozen in time and waiting for things to change from the outside. This newly learned and shared pandemic vulnerability meant for most of us to reduce our real life encounters and therefore find new ways to connect, meet and organize.

For the last couple of years, I have been involved with antiracist organizing in Berlin. These efforts have always heavily relied on interpersonal relations and trust but also on translation and exchange between people with highly different backgrounds. Our demands had to be rooted in the experiences of people who suffered from racist policies, but our organizations also depended on the efforts of people with safe residence status and knowledge of German politics. To be able to voice these demands together, we had to put a lot of work into building trust.

However, during the pandemic, spaces or distances also seemed to shrink on occasion, with new possibilities sometimes emerging. New channels of communication and places of organizing and activism have been developed. Online meetings have become the new normal (even though it is important to note: not for all of us, as this was heavily dependent on skills and equipment) and allowed us to meet with activists and initiatives from other cities and countries with relatively little effort. There has also been a multiplication of spaces that we use and shape with our movements and practices. For example, as we tried to organize public mourning of the racist killings of Hanau or Halle, we faced not only policies that restricted how many people could attend but also our own concerns what we would consider safe for ourselves and marginalized communities. Therefore we and other groups experimented with other forms of protest, like online rallies or streaming pre-recorded speeches in many different places in Berlin or distributing them through as many digital channels as possible.

And while this forced switch to the digital did have a considerable downside for many groups, for example those who heavily rely on personal connections and meetings where you feel safe enough to talk without suspected surveillance, it also allowed for a workshop like this, to reflect and map our current status.

How have our movements been doing during the pandemic?

This was one of the guiding questions that a small group of roughly twelve activists, organizers and researchers from different countries and struggles – from housing issues to feminist organizing – would all have their own answers for.
The framework for this collective reflection in our pandemic mapping session was a conceptual diagram that featured four spheres: representation, relation, inhabitation and organization.
I highly recommend reading this article “Building Power in a Crisis of Social Reproduction” for more details about the methodology and the theoretical framework behind it.

The diagram was explained to us participants through the example of recent left-wing social movements in Spain and Barcelona. Different initiatives, platforms and practices, like struggles against evictions, square occupations, or newly formed political parties like Podemos or Barcelona en Comú were all shown to occupy distinct places and strategic goals in the matrix between relation, inhabitation, representation and organization. Mapping them like this made visible how the different movements could relate to each other and how the different groups were better suited to fulfill different roles.

This has been a recurring theme for me: the idea of a movement ecology or to think social movements ecologically – basically to think movements and initiatives as part of a system where they are also interacting with each other.

In our efforts to make a difference in people’s lives and create radical politics, we know that we are not alone, but our initiatives can often feel a little bit isolated. We often talk about how to connect different struggles, yet what this would look like in practice often remains rather vague. Two main reasons are obviously limited resources and capacities and sometimes perceived competition between groups, but also not enough spaces for different groups and initiatives to come together and see how they can build upon what others are already doing.
For that reason mapping workshops can contribute to creating these spaces while at the same time giving us tools to guide these conversations.

This specific mapping workshop worked beautifully with the question that was posed at the beginning of the workshop: How have our movements been affected during the pandemic?
This allowed us to think in terms of transformation and in terms of efforts. Where would we have located our initiatives and our practices before the pandemic and what are the ways in which we were forced to adapt? In what areas were we able to gain strength and resources, and where did we face problems?
To apply this knowledge to the context of antiracist organizing in Berlin it makes sense to take a closer look at the spheres of relation and inhabitation or to places of coexistence or encounter – where community emerges. These spaces largely had been affected, to different degrees, by the fact that meetings were at times almost impossible.

This loss of space transformed our relations drastically. That’s why a considerable amount of effort had to go into coming up with strategies to find new ways for mutual aid, new ways of coming together and staying in contact.

To map out various initiatives and their functions like this is even at first glance very helpful to understand intersections between social movements. Furthermore, the mapping exercise can be used as an analytical tool for understanding current fields of politics.
Another layer could be added if the participants doing the mapping would also share a local context or strategic goals, therefore turning the mapping session into a social movement space itself. Simultaneously to mapping, people would create connections between their initiatives and use that to develop strategies.

This first setting was a potential starting point for further mapping sessions. This workshop functioned in a way as a practice setting between activists and researchers for testing out a new tool and to refine and analyze specific aspects of it. This in turn could allow the participants to use it in their local contexts.

This is especially useful, because even before the pandemic, there has been a lack of spaces or opportunities to learn new methods and reflect on our collective struggles. And now with months of isolation and struggling to even meet with people we already know and trust, the potential to create these spaces and use mapping to develop collective strategies is even more important.
Still, regardless of how and where we create spaces for our movements, we have to be careful to implement practices of care and mutual aid so that mapping and strategizing can be a collective process. Because if we really want to use mapping as a tool for strategizing and to make movement ecologies visible for movements themselves, we need to create accessible spaces and make sure that these findings are produced collectively

Michel Jungwirth studied Political Science at the University of Vienna and currently lives in Berlin. There he is involved with several antiracist initiatives and organizing regarding issues of migrant solidarity.